We are getting used to politicians using euphemisms to be politically correct and win votes. However, this is not as simple as one would imagine, since the use of euphemisms is not innocuous. On the contrary, it is completely intentional and has the purpose of hiding the reality from those who are affected by their decisions.

The use of euphemisms is by no means new. We have been hearing them in the media for decades. Traditional examples are: collateral damage for killing civilians in wars, ethnic cleansing for genocide, ministry of defense for the ministry of war, army intelligence (is this not an oxymoron?) for espionage, friendly fire, etc. For the time being, these expressions have been used in war scenarios. But now, the financial crisis is extending their use to other situations. Probably, because another war has now started. And this war, just like conventional ones, takes place in the media. From politicians and those with public responsibilities in different public and private institutions, we hear expressions like deceleration of the economy when they mean crisis. Temporary negative growth for recession. Fiscal consolidation for tax increase. And above all, austerity when what they really mean is cuts.

If it was not so dramatic, Spanish scientists would perceive these euphemistic terms applied to cuts in science as a joke. But the current situation transforms the joke into an insult. Spanish scientific system has always been austere. With a total expenditure of less than 1.4% GDP at its maximum, it is almost impossible to be spendthrift. Nevertheless, Spanish researchers have made a strong effort in the last few years, and have placed the country in the ninth position in the world in terms of number of publications.

We all remember the perspectives and promises raised after the Lisbon Treaty, in which the country was expected to meet a target R&D investment of 3% GDP by 2010. However, to add insult to injury, the R&D expenditure in 2011 in Spain was reduced to 1.3% GDP, which has probably decreased even more in 2012 and 2013.

Now, the Government says that they are committed to reach the goal of 2% GDP by 2020. Driven by the EU Horizon 2020 program, the Government has just launched the Spanish Strategy of Science, Technology and Innovation 2020. The Strategy pledges to almost double the representation of PhD-holders among the population age 25 to 34, increase research employment from 11.8% to 16% and increase Spain’s share of European Union research funds, including a 90% increase in the number of ERC Starting Grants, all by 2020.

This seems like another joke, because the plan does not foresee an increase in the public budget but relies on the private sector, which is in the worst possible financial condition. Actually, the science section of the trade union “Comisiones Obreras” has shown data indicating that the real investment of the Spanish private sector in the last two years, after deducting public low-interest credits and subsidies, has been negative in terms of percentage of GDP.

The present and previous Governments have cut the national budget of R&D by about 40% in four years. This is a suicidal, disheartening and devastating policy. It is having serious implications in the development of relevant research lines. Of even greater concern is that the careers of a tremendous number of scientists has been affected. The main public research institutions are engaging only one researcher for every 10 retirements. Programs for PhD and postdoc training have been suspended. And the annual call of national funds for research has been delayed four months, so far. 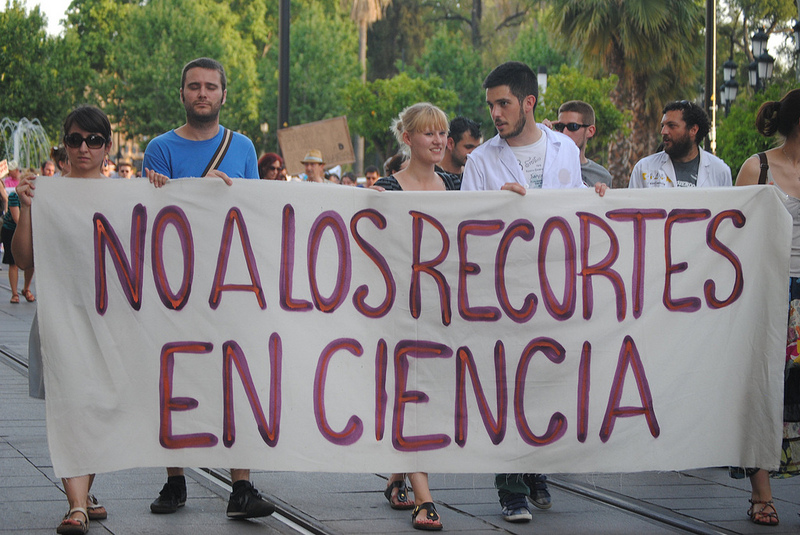 Although there are no official data after 2009, the year in which the first cuts were imposed, a massive exodus of Spaniards holding university degrees and PhD titles is taking place and is on the increase. This trend is happening against a backdrop of unemployment rates of 26% in the general population and 52% in young people. The current brain drain is what the Government has called “foreign mobility” and “spirit of adventure”. More realistically, and avoiding euphemisms, the Spanish scientist Amaya Moro-Martin, says that the exodus of Spanish young scientists is “no brain drain, but a brain annihilation.”

The Spanish scientific system is going fast downhill from the 20th century back towards the 19th century. Scientists are tired of hearing that R&D is a priority and the cornerstone of a new growth model. Only to realise that these sentences are just fairy tales.

We need facts and the facts, so far, indicate that if the policies are not changed in the manner of a Copernican revolution, the whole scientific system will be annihilated.

This is no euphemism and no joke.